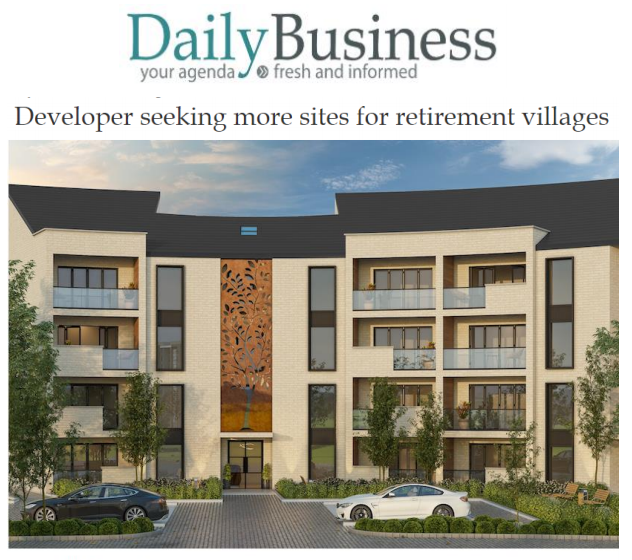 Retirement villages developer Scotsbridge Holdings is seeking out new locations after announcing that construction work on the first one in Scotland will begin early next year.
The self-contained development at Newton Mearns on the outskirts of Glasgow will be built in 17 acres of countryside overlooking the city and will be named “The Hills at Whitecraigs”.

Scotsbridge, a Glasgow and Singapore based company, has received full planning consent for the project and is now targeting other locations in Scotland for similar developments, supported by a pipeline of
overseas investment.

The Hills at Whitecraigs will provide a complete approach to retirement living with luxury suites and facilities designed to encourage healthy living and wellbeing.

Life at the village will centre around a central two-storey club house, containing a bar, cafe and community facilities. The village will comprise of pools, spa facilities, a fitness suite, multi-use spaces for community
events, a contemporary restaurant and function suites.
The Hills at Whitecraigs project is the first of its kind in Scotland and will comprise 214 one and two-bedroom flats, 38 cottages (252 dwellings in total) and an 80-bed care home.
Aimed specifically at over 55s, it will promote a more holistic approach to residents’ health and well being through its design and landscaping, with a high density of trees and water features, and specific facilities
such as a bowling green.

Scotsbridge director Shazad Bakhsh said: ” As people live longer there is growing demand for high quality accommodation that will meet their changing needs, but also help them to enjoy a full, active and varied
lifestyle.
Skazad Bakhsh: ‘much more than a retirement facility’
“we plan to offer our residents is much more than a traditional retirement facility and we want to change how people in Scotland look at later living.’

Scotland has a rapidly ageing population. According to the National Records of Scotland (NRS), in mid- 2018 just under one in five (19%) people in Scotland were aged 65 and over compared with 16% in mid- 2008. Life expectancy has also increased over the last three decades, although improvements have stalled in
recent years.

Scotsbridge is combining its own funds alongside global investors from South East Asia and Europe to target more property developments in Scotland. The company is already involved in two major joint venture developments with Osborne+Co in Glasgow.
Together they are building office development in Argyle Street in the heart of the city’s International Financial Services District for US financial giant JPMorgan Chase.
They have also purchased the former City of Glasgow College building Met Tower overlooking George Square and plan to redevelop it into Grade A office space capable of hosting 1,200 workers.
Mr Bakhsh added: “Along with our partners and investors, we believe Scotland offers a stable environment in which to invest funds in major property developments offering a good return.”
Scotsbridge was established in 2015, by Mr Bakhsh and his two Singapore-based fellow directors, Kunal Nathani and Neeraj Daryanani, with the aim of acquiring, redeveloping and repositioning property developments in Scotland.